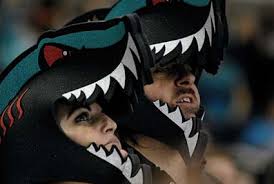 This morning in my business networking group, I stood up, put a Foam Worcester Sharks shark hat on and proceeded to ask if anyone felt like they were being eaten by their stress? The mothers in the group nodded their heads as they prepare to get their kids back to school and the men laughed as they knew the meaning of stress through their work schedules. But what exactly happens when stress occurs in our bodies? It’s nothing short of a shark attack!

As Stanford psychiatrist David Spiegel puts it, “Living a stress-free life is not a reasonable goal. The goal is to deal with it actively and effectively.” Stress is a combination of physiological and emotional responses to an event. Some of the physiological responses may include increased heart rate and blood pressure, sweating, dry mouth, tight muscles, and/or headaches. Some of the cognitive or emotional responses include negative self-talk, restlessness and/or the inability to concentrate.

The physiological effects of stress are measures taken by the body to tackle the stressful condition. The human body is a complex organization of various systems which function hand in hand. All the functions are done only if the interior environment of the body is optimal. The internal environment includes the chemical substances and the pH, both inside and outside the cells. The optimal range is very narrow and the body strives very hard to keep everything within these narrow physiological stress limits. If the internal homeostasis is disturbed, then certain compensatory adjustments take place.
The disturbing factor could be an infectious disease, a non infectious disease, or simply any stress. If the disturbing factor is stress, then the body secretes certain stress hormones to tackle the situation with a response called the “Fight or flight response”.

Fight or flight response
When the body is exposed to a stressful condition, the hypothalamus situated in the brain (hypothalamus is concerned with the secretion and control of the different hormones of the body) secretes adreno-cortico-trophic releasing hormone (ARH).
This hormone stimulates the pituitary gland which is situated below the hypothalamus to secrete Adreno-cortico-trophic hormone(ACTH). ACTH in turn stimulates the adrenal or the suprarenal glands situated on the top of the kidney to secrete the stress hormones namely the adrenaline and the cortisol. These two hormones are responsible for the physiological effects of stress through the’ fight or flight response’ by making certain functional adjustments.

Effects on Various Organs and Systems
The effect of these adjustments is to prepare the body to tackle stress by providing more energy in the form of increased oxygen and glucose.

b) Cardiovascular System
The hormone adrenaline acts on the B1 receptors of the heart (B1 receptors are chemical substances present on the wall of the heart which readily combines with adrenaline and related hormones which results in stimulation of the heart) resulting in increase in rate and force of contraction. These are called positive chronotrophic and positive inotrophic effects respectively. The final result is increased cardiac output. The hormone also acts on the alpha receptors of the blood vessels (alpha receptors are chemicals found in the walls of the blood vessels which readily combine with adrenaline and related substances which results in stimulation of the blood vessels) resulting in their contraction which increases the blood pressure. The final result is effective delivery of blood to various tissues of the body.

C) Respiratory System
The stress hormones act indirectly on the lungs resulting in an increased respiratory rate. This allows more oxygen to enter the lungs, and subsequently the blood which then is taken to various tissues.

d) Non-Vital Organs
Blood supply to less vital organs like the spleen, gastrointestinal tract and skin is decreased in order to supply blood to more vital organs like the brain and the heart. The spleen is a reservoir of blood and it shrinks to expel blood in to the blood vessels. The gastrointestinal tract is deprived of blood supply resulting in poor digestion. The mouth and the throat become dry making difficult to speak and swallow. There is a decrease in the blood supply to stomach. This results in worsening of any ulcers present along the walls of the stomach. The transit time of the colon is increased resulting in loose stools. The skin is the largest organ in the body that becomes cold and clammy. The erector pilae muscle which is attached to the hair follicles contracts resulting in goose flesh.

e) Immune System
The hormone cortisol **which is a steroid** is an immuno-suppressant. Increased levels of this hormone suppresses the immune system resulting in increased susceptibility to infections. Though steroids are the mainstay in the treatment of allergic disorders, in the long run they derange the entire immune system. So cortisol which is a steroid, if secreted continuously due to persistent stress, will result in a flaring up of allergic disorders.

Everyone in this world experiences stress. There is no escape from it. One just has to figure out how to handle it effectively. Those answers coming next week so stay tuned!